At first I want to introduce you to the stats on the bottom left, these seperate in the following:

HP is pretty self-explainatory, it indicades how much damage you can take. It is made up by this formular: Physical*10+Creating*5 whilst your HP/s depends on your Mystic-Stat which should be about 1/20th of your Mystic stat.

Divinity wont matter for you early on.

Attack is the amount of damage you do per tick, this game has 33.5 ticks per second. Battle will increase your Attack in a 1/1 ratio while Physical increases it by 1/4. It increases while fighting monsters with your clones.

Physical is a Stat that increases with training. It increases your HP by 10 per point and your attack by 0.25 per point.

Mystic Is your defense in this game, 1 Defense per Mystic= 1 less damage per tick per Mystic. It also increases your HP/s

Don't mind the different numers, it is basically the same afterall.

So let's first talk about the Interface in this game. You have a variety of Game-Tabs available split up in four major categories: Build, Train, Fight, Other. These are visible in the top left hand side of the Game, right next to the name.

Each of these is seperated in different subtabs.

So let's get started. The build Tab only contains one thing that you need to worry about for quite a long time. That is Create, here you create things, more specifically you will create Shadow Clones, these guys are doing everything for your and are one of the two ways to improve your stats. The other one being creating things. After defeating the first gods you will be able to create other things, these work as resources to create yet again other things, or to build things (which will happen much later in the game).

The Train tab will be a good friend for you, always, there is no way around it. Here you can send your freshly created Shadow Clones to do some exercisement for you, of which you will, suprsingly, benefit yourself. Makes Sense right? You can train two different things early on, Skills and Physical. Skills increase your Mystic count and Physical increases...well your Physical count. The amount you get can be seen on the top left. You can assign clones to do these Tasks when clicking on the +. - Will simply remove Clones again, how many? That you can set on the top right to middle site of the Interface. (marked in the picture below) You can choose anything between 1 and max, where max is your current maximum clone count. You can also set custom numbers.

Additional Hint: Clicking on "Cap" next to a training will assign as many clones to a skill until it is done at the fasted rate possible (called blackbarred or bb) 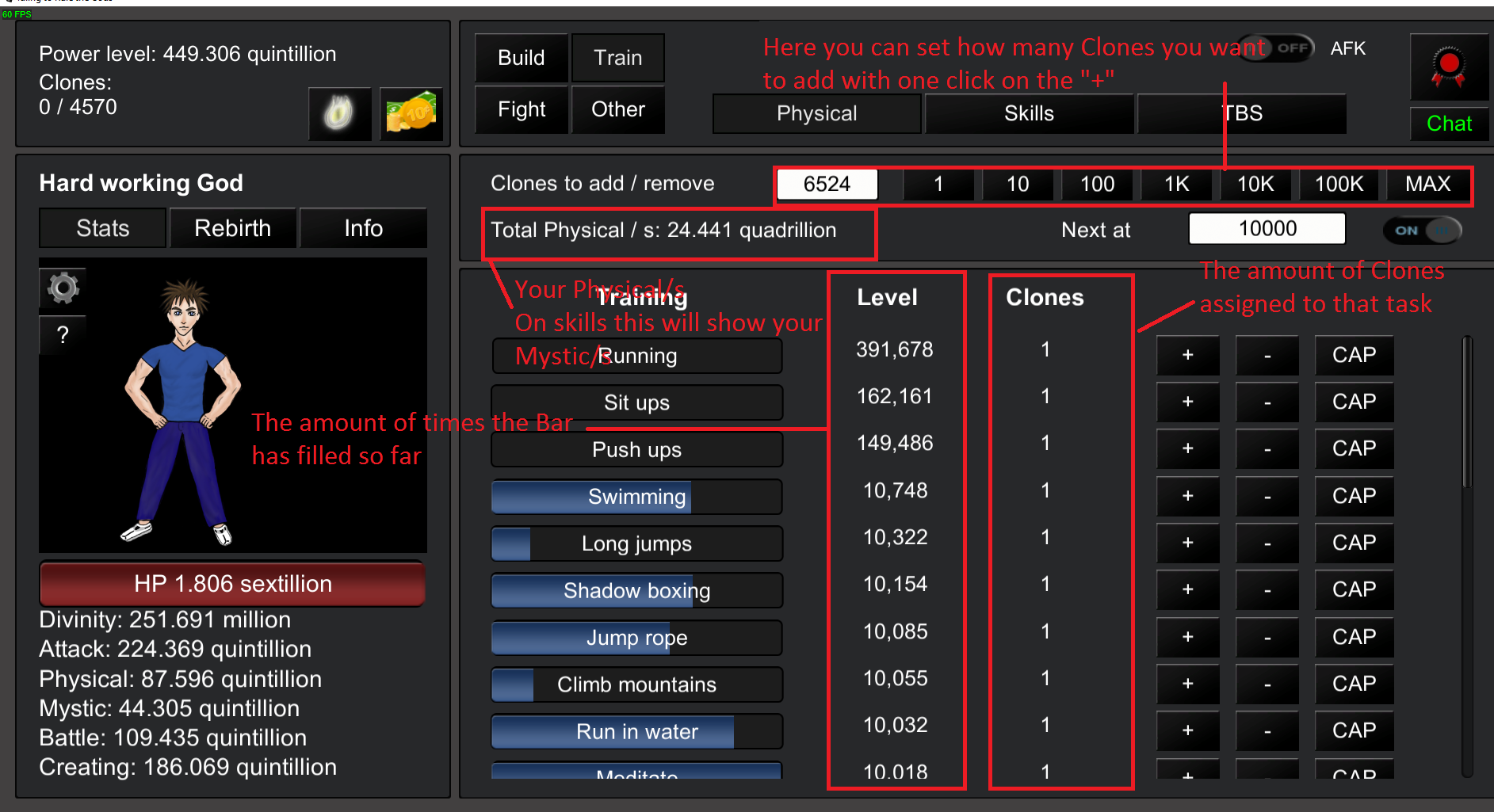 Here you have the options to fight monsters at the moment you will only see one. Just as in the

Train Tab you can assign clones to find these savage monsters! Doing so will make your clones fight them, though be careful monsters hit back, and early on, they do that hard. The recommended amount for fighting a slime is about 250 clones when having 20k Physical or more. Don't worry this will get easier as you advance. Killing a monster once will unlock the next monster which will be a lot stronger. But why do you want to fight monsters? For Battle ofcouse! The battle stat increases by X per second (visible exactly where you can see the mystic per second or physical per second as well).

But the next thing will one of the most important tabs of them all, the god tab, the reason why you do all of this! There are a few very well-researched Gods which all have a ton of HP Attack and Defense, so fighting them is no bed of roses! Once you defeat a God you can unlock further creations and you eventually get GP ( I will talk about this in the other part of the guide as this is simply for the interface and modules in this game) You will only get GP for defeating a good once, that is until you hit Izanagi from there on a god will ALWAYS drop 1 GP.

The Special tab is probably very confusing, just make sure that you leave the "auto" option on whenever you don't use skills yourself, obviously, you can click the skills yourself but that requires a lot of patience, why would you want to do that? Earlier I told you that you can blackbar trainings, the amount of clones required to do this lowers by 1 every 3 times you use one of these skills in the Special tab. The auto function uses all skills once every minute, so the cap of all currently available trainings will lower by 3 every minute. Great, eh? You will unlock pets eventually from time to time and they can fight assigned clones which will increase their stats and give them exp, the higher the stats the better the clones they can fight the more exp they will earn which will eventually increase the rebirth-bonus you will recieve from your Pets.

The Other tab is simply there for lore, statistics or settings for colour/music and some other matters of preference.